Background
Raised blood pressure throughout its range is the single biggest cause of death through the strokes and heart disease it causes (e.g. 62% of all strokes and 49% of heart disease) [REF 2]. A high salt intake is the major factor that puts up our blood pressure [REF 3].
In the mid-90s an action group, Consensus Action on Salt & Health (CASH), was set up, consisting of leading experts on salt and blood pressure in the UK. CASH was successful in persuading the government to invite the Food Standards Agency to develop a salt reduction programme, working in collaboration with CASH. As 80% of the salt that is consumed in the UK is put there by the food industry i.e. in processed foods, fast foods, canteen and restaurant foods etc, the public have no choice about eating it. Therefore progressive incremental targets to limit the amount of salt for each food category were set, which the industry had to achieve in a specified time. Reductions first started in 2003 and are continuing to this day.
Most products in the supermarket have now been reduced from 20 to 40% [REF 4 ]. These reductions have been made slowly, and there have been no loss of sales to the food industry, and the public are largely unaware of these reductions.

Salt
Salt intake was measured by 24hr urine collections, measuring the amount of sodium in a random sample of the population in the National Diet and Nutrition Survey (NDNS) and fell from 9.5g per day in 2003 to 8.1g per day in 2011 i.e. a 15% reduction.

Deaths
From the Office for National Statistics, which records deaths, over the same time period 2003 – 2011, stroke and heart disease deaths have fallen by 42% and 40% respectively. Several other risk factors for cardiovascular disease other than salt intake have also changed for the better during this time, including a reduction in smoking and cholesterol, however average body mass index (BMI) rose. Nevertheless it can be concluded that the fall in salt intake that led to a fall in blood pressure will have played an important role in both stroke and heart disease deaths. Indeed from this fall in blood pressure that has occurred, we can predict that approximately 18,000 stroke and heart attacks have been prevented each year – 9,000 of which are fatal [REF 6].

“This is great news for the UK, and shows just how effective the salt reduction policy is” says one of the paper’s authors, Sonia Pombo. “The food industry has worked hard to reduce levels of salt across many of their products, and as a result, average intakes of salt have gone down. The brilliance of the programme means that shoppers can still buy their favourite foods, just with less salt in them!” 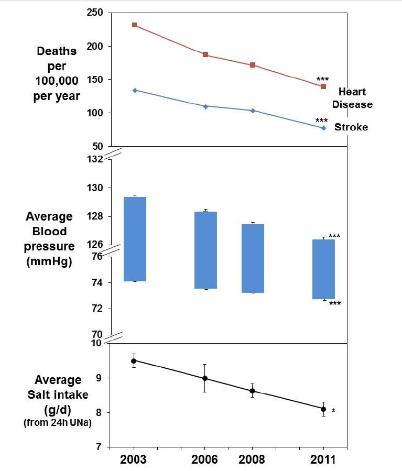 Cost Effectiveness
Salt reduction is already known to be the most cost-effective public health intervention. The National Institute for Health & Care Excellence calculated in 2011 that the salt reduction programme had already resulted in £1.5bn health care saving costs in the UK, at a cost of only £5m per year [REF 6].

Further Action
However UK salt intake remains high, at 8.1g/day, and is way above the target of 6g/day. The results of this study indicate that we need to redouble our efforts in the UK, in particular to get the food industry to act faster and more aggressively to save the maximum number of people from suffering and dying from stroke and heart disease. Last month the Department of Health, who took over the responsibility for nutrition from the Food Standards Agency in 2010, published new targets for salt reduction to be achieved by 2017 [REF 7]. It is vital that the food industry and in particular, the ‘out of home’ sector sign up to these targets as the evidence for benefit is now clear. If they don’t sign up to these salt targets then they must be regulated by the government in order to ensure the maximum benefit. Indeed in South Africa, where a similar programme based on the UK model has started, the salt targets are regulated and the same global food companies there preferred a regulatory system rather than a voluntary system as it gave them a level playing field.

This is great news, as it shows that the salt reduction plan that CASH developed with the Food Standards Agency is working and saving lives” says Graham MacGregor, Professor of Cardiovascular Medicine at the Wolfson Institute, Barts and the London School of Medicine, and Chairman of CASH. “It is vital that we continue to get the maximum reduction of salt from the food industry. The Department of Health must take a much more robust attitude to the food industry, forcing them to reduce salt intake quicker and across the board in order to assure a level playing field. If they do not, we must regulate the salt targets to ensure that the maximum number of lives are saved and the maximum cost savings are made for the NHS”.

Global Implications
These results have important implications to the rest of the world as nearly every country now eats between 9 and 14g of salt a day. The UK has led the world in a well thought out, structured salt reduction programme and it is now important that other countries follow, particularly in those countries where most of the salt consumed is put into food by the food industry. Whilst in the UK supermarkets have in general led the salt reduction programme, well-known international branded companies have also reduced salt to similar extents. These include companies such as Unilever, Nestle, Kraft, Kellogg’s, Heinz, Pepsi-Co etc. These are all global food companies and if they can reduce it without loss of sales in the UK they can do so internationally.

Clare Farrand, Programme Lead for World Action on Salt & Health (WASH) says “In our view it would now be a gross breach of ethical and corporate responsibility for companies not to reduce salt as the benefits of salt reduction are now so clear. The Journal of Human Hypertension recently published a step-by-step guide to developing and implementing a national salt reduction programme based on the experience in the UK which other countries can adapt to their own circumstances [REF 8].”